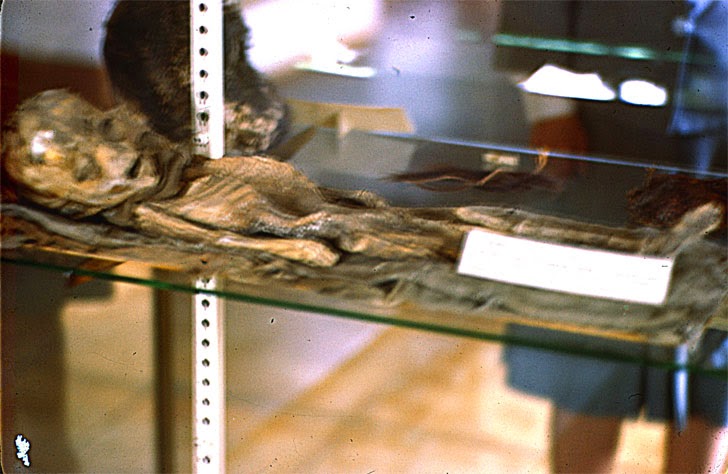 The “Roswell Slides” are images that a group of UFO promoters – including Anthony Bragalia, Jaime Maussan, Adam Dew, Donald Schmitt, Tom Carey, and Richard Dolan – put forward at an event held on May 5, 2015, in Mexico City, as proof positive of an extraterrestrial crash at Roswell in 1947 and the recovery and cover-up by the US government of alien bodies. These are claims that most of the aforementioned group have been making for over two years now. They have repeatedly said that the best experts they could find were examining the slides, and that they had determined the slides showed a creature that was of unearthly origin. “Roswell slides” promoters Don Schmitt and Tom Carey at the BeWitness event in Mexico City, May 5 2015.

Nothing could be further from the truth. As many skeptics have been saying since the first rough image of one of the slides was procured several months ago as a screen capture from a promotional video released by Dew, the figure photographed and shown in the slides is almost certainly a mummified body.

We can now remove the word “almost” from the aforementioned sentence. The key to solving the mystery was in the placard seen in the slides in front of the body, a placard that the slides promoters assured everyone could not be deciphered despite extensive examination. Here is what Don Schmitt said on April 12, 2015:

This will be part of the event, part of the program in May, that all of these analytical reports, all of the analyses, all of the main experts as well as the photographic experts who examined- there’s a placard, very fuzzy, that can not be legibly read by the naked eye, yet we’ve had everyone from Dr. David Rudiak, to Studio MacBeth, even the Photo Interpretation Department of the Pentagon, as well as Adobe have all told us that it’s beyond the pale, that it cannot be read, it is totally up to interpretation.So, we truly feel we have performed due diligence; we have done everything we can to substantiate and prove what is contained within these slides, whether it is something of a human malady or something truly extraordinary.

It took us just a few hours to prove otherwise, once we received a high resolution copy of one of the slides (note: while our copy came from an inside source within the promoters’ group, slides promoter Adam Dew has now released it as well).

Deblurred image from original slide(not photoshopped in any way other than a slight increase in contrast to help bring out the words that are clearly on the placard.)

By using the commercially available SmartDeblur, a member of our group (Nab Lator), was able to significantly clear up the blurred text. Other members of the group helped narrow down the actual words.The first line was the most clearly resolved:

There is no reasonable doubt that this is the true and correct text.

The other three lines of the text are more difficult to decipher, but seem to say something like:

The entire effort only took hours, quite a difference from the “years” of research claimed by the slides promoters. The fact that the promoters did not release proper high resolution scans of the slides made our work more difficult, but in the end it was still relatively easy to decipher the key parts of the image.

The mystery of the placard is solved, and so is the nature of the body.

It was a boy, from Earth.

The question that remains is whether or not the Slides promoters have been deliberately deceiving the public in order to profit financially, or whether they were simply incompetent. Perhaps it was a mixture of both. Either way, their credibility as investigators and researchers has been destroyed.

The Roswell Slides Research Group are:

Thanks to our colleagues and associates Alejandro Espino, “Trained Observer”, Philippe Hernandez, Aaron John Gulyas, Irna France, Nick Redfern, and Fin Handley, as well as many, many more who offered help.